The 14-day social media advocacy against Sexual and Gender-Based Violence launched by the First Lady, Dr. (Mrs.) Ibijoke Sanwo-Olu, after consultations with inter-ministerial stakeholders, has been successfully concluded with positive feedback on its impact among youths.

According to a statement issued on Tuesday by the Head, Public Affairs, Office of the First Lady, Mrs. Olubukonla Nwonah, the 14-Day campaign, which has just ended, was the culmination of a series of activities coordinated by Mrs. Sanwo-Olu, in partnership with relevant stakeholders, to step up the fight against SGBV.

She recalled that on June 11, 2020, the First Lady participated in an All-Male Walk Against Rape where she received signed pledges by men of good conscience, who have decided to speak up against the menace, adding that the symbolic Walks were held in different parts of the State including Surulere, Bariga and Alimosho Local Government Areas, where signposts declaring the Councils as “Rape Free Zones” were unveiled. 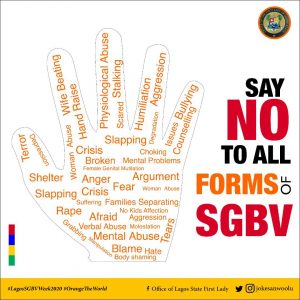 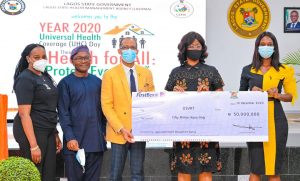 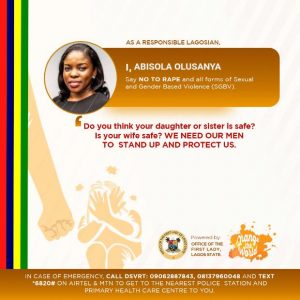 Nwonah said, “Mrs. Sanwo-Olu, in furtherance of an annual global 16 Days of Activism by the United Nations to end all forms of violence against the female gender, during the LagosGBVWeek, held a Press Conference to bring issues of GBV to the front burner, followed by community courtesy visits and sensitisation programmes both in Alausa and Alimosho General Hospital”.

She spoke further saying, “The wife of the State Governor also visited the Lagos State Domestic and Sexual Violence Response Team (DSVRT); Lagos State Office of the Public Defender (OPD); Gender Desk Unit of the Nigerian Police, Panti and site of the proposed shelter for victims of domestic violence”.

Giving further details of the programmes held to stem the tide of Gender-Based Violence, Nwonah disclosed that the First Lady equally made presentation at a Public Hearing by Lagos State House of Assembly on a Bill to establish the Lagos State Domestic and Sexual Violence Agency and the Sex Offenders Register, while supporting the Lagos State Health Management Agency (LASHMA) launch of the Rape Trust Fund for victims of SGBV.

While revealing that a Compendium of Stakeholder’s Meetings on SGBV in the State was presented to Governor Babajide Sanwo-Olu, the Public Affairs Director maintained that the focus of the First Lady is to ensure that everyone, irrespective of gender, age, socio-economic status in Lagos and Nigeria, needs to embrace the essence of the campaign until all communities in Lagos eradicate the ugly hazard.

I'm a Strategic Communications Expert with over 9 years industry experience. I own unilagefiwe.com and olubayopaul.com; a widely published writer and a fluctuating Graphics Designer